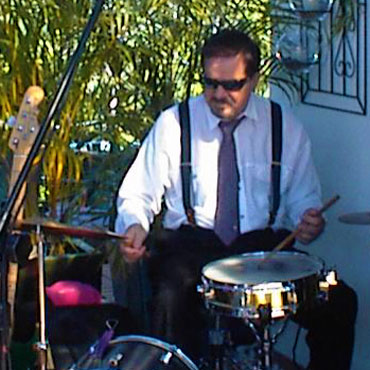 In 1987 Barry Sutton returned to Australia after 15 years of commuting between London, Majorca, and Sydney, where he had played Percussion on many different projects, including session work in the famous recording studios in London during the 1970s’. He also returned to Australia to head the pilot touring programme for Musica Viva in Sydney. Then in 1990 Barry moved to Queensland where he performed for 5 years with the Queensland Arts Councils’ Schools Touring Program. During the last few years Barry has performed at the “Manly Jazz Festival”, “Thredbo Jazz Festival”, “Noosa Jazz Festival”, and the “Sydney Festival”. Recently, Barry has worked with Anita Thomas and John Morrison, John Nicol, Don Burrows, Janet Seidel, Don Raider, Bruce Poulson, Bill Saragih, Gary Lee, and Cory Sea. At 2003 “Manly Jazz Festival” and the“Australian Jazz festival” in Canberra he performed with Cicilia Kemezys and Steven Scott in their Brazilian/Cuban group. Barry, bor n and raised in Queensland started playing Latin Percussion in Sydney around 1965 and by the time he left for London in 1972 he had worked with Shirley Bassey, Trini Lopez, Lou Rawles, Billy Preston, and Sammy Davis Jnr.

In 1980, while back in Sydney for a short period he worked with Tommy Emmanuels’ Band and Bette Midler at the State Theatre as part of her world tour. Apart from touring the jazz festivals, he performs with the Lounge Band the “Bazkatz” and is also part of the Salon Ensemble “Empire Salon and Dance Orchestra”, & the “Barry Sutton Trio” with pianist, Kathy Sander, and bassist Bryan Pearson. Another recent project is a duo/trio with keyboardist, Sammy Pace. Barry plays drum kit, latin percussion, and he also sings from the drums. His playing has been influenced by the many musicians world-wide that he has had the pleasure to work with, forming many bands in Sydney with Italian, Greek, Jewish musicians, and a period of study undertaken in South America on an Australia Council grant. This built a keen interest in the music of Cuba, Chile, and Brazil, along with a passionate need to perform jazz.