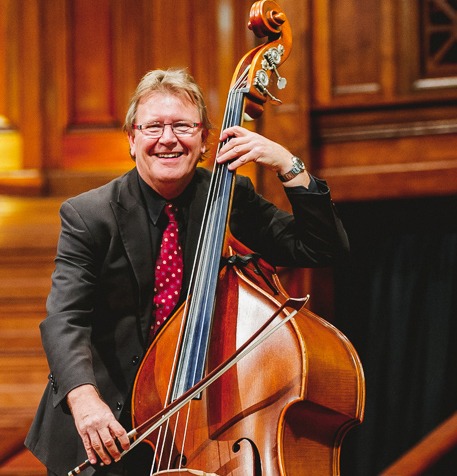 Born and educated in the United Kingdom, Bryan, a multi-instrumentalist, vocalist,  and a fine piano player,  is predominantly an acoustic and electric bass player, working extensively in Australia and overseas.

Highlights have included sessions with the Tommy Watt Orchestra, with whom he recorded and broadcast for the BBC, and touring the world on P & O Passenger Liners for Hubert Warren Orchestras. During his time in the UK, Bryan has backed many famous stars including Tommy Cooper and Les Dawson, and performed in the band for the “Black & White Mistrel Show”.

Moving to Australia he performed with many bands of varying styles along with orchestral playing and began teaching music and conducting bands in Primary, Secondary and Tertiary institutions. Recent overseas professional work includes playing in the show bands on MV Mercury, MV Diamond Princess ; the Star Princess – as well as a contract with the resident orchestra on RMS Queen Mary 2 in its inaugural year.

Currently working as an Multi-Instrumental Music Specialist Teacher for Education Queensland, Bryan has played with the Queensland Pops Orchestra – highlights are backing Eric Idle, and recently the King’s Singers, the Northern Rivers Symphony Orchestra,  and also works as a free-lance jazz/classical performer. Bryan is also actively involved in promoting and researching Salon Music for the “Mood Music Orchestra”, holding the bass chair in the “Mood Music Band” as well as this Brisbane based duo “Amica“ – in collaboration with Kathy.